Stop Dragon My Heart Around

Stop Dragon My Heart Around

Brad Anderson
"Stop Dragon My Heart Around" is the seventh of the HBO Max series based on the DC Comics character Peacemaker. It aired on February 10, 2022. It's also the penultimate episode of the eight-episode series.

Harcourt, Murn, and Adebayo find themselves surrounded by an alien force, while Peacemaker squares off against his father with help from Vigilante and Economos.

Years earlier, a young Chris and his brother Keith are in their room listening to rock music. Auggie for his part is holding bets, and then encourages both of his sons to head out and fight one another in a no-holds barred match. With a big punch to the cheek, Chris knocks out his brother who ends up convulsing and fitting on the floor.

As Keith begins frothing at the mouth, Auggie jumps in and realizes Chris has killed his brother. In the present, Peacemaker reflects on this painful moment from his past, as he struggles to hold back tears.

Vigilante snaps him out of his entranced state though, as the pair collect their gear and prepare to go after Locke. Economos is with them too and drives them to their destination. Only, they’re not alone. White Dragon and his fanatics are on their trail. White Dragon smashes into the side of the truck and knocks them down.

Peacemaker and the others do manage to escape though, but it doesn’t take long for them all to mobilize again. Peacemaker soon realizes his helmet has a tracking device in and he ditches it, losing White Dragon in the process.

In their absence, Emilia confronts Leota about the planted diary. The thing is, Leota reveals that she actually lost her job and Amanda Waller offered her this one, which inevitably sees the truth about Waller being her mom divulged too. Murn however, already knew this though, as it turns out, and he implores the pair to stop bickering and collect their gear. With all of their Butterfly brains connected, and Locke now compromised, the whole operation is hanging in the balance.

Meanwhile, Judomaster manages to escape froM his restraints, having recovered from his chest wound, and stands at the convenience store, all bandaged up and eating chips. He then beats up a couple of thugs and steals a car, and proceeds to take off.

Back at the apartment, Emilia and Leota manage to evade the police, who show up and find Murn. After killing him, and the Butterfly inside him, they’re left alone to carry out this operation. Only, Judo Master suddenly enters, leading to a big fight between him and Emilia. He takes his eyes off Leota though, who manages to take him out with a taser.

Back in the field, Peacemaker and Economos catch up with Vigilante, who happens to be passed out in his car. Unfortunately he’s also taken all of Peacemaker’s helmets from Auggie’s house and that leads White Dragon back to him. After knocking down Eagley, Auggie turns his attention to Peacemaker. Knocking him down, Auggie prepares to take his son out. Only, Economos shows up with a machine gun, killing all the fanatics alongside him. Vigilante pounces on Auggie and short-circuits his suit.

In doing so, Peacemaker turns his attention to his father and punches him numerous times, calling him out for his hostile attitude in the past. As Auggie antagonizes him, Peacemaker grabs a gun and shoots his dad in the head. Peacemaker worries that Eagley is dead meat and ends up praying to the Lord to save his pet, given he’s the only one who understands how he feels. With Leota watching from the window, she looks in awe at the bird as Eagley reawakens and embraces Peacemaker. Leota is shocked, and she sees this as a sign. Instead of heading home, she’s all-in on the Cow plot.

With Emilia now leading the charge, she briefs the team and warns them that this isn’t going to be an easy task. With Goff and the rest of the gang mobilizing at the Ranch, Emilia and the motley band of misfits all join together and prepare for the final fight.

Elsewhere, Goff and the other butterflies, a glimpse of the Cow is seen, who has 6 eyes and large udders. The amber is extracted from this creature, which is being kept somewhere deep underground. 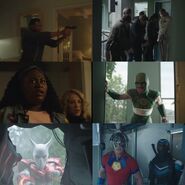 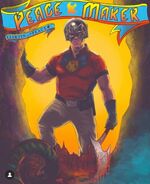 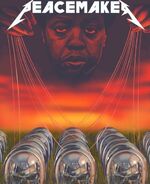