Peacemaker
Auggie Smith was the cruel white supremacist supervillain known as the White Dragon, and the nasty and disapproving father of Peacemaker. Head of the Aryan Empire, Smith was arrested for his son's crimes, and after the mistake was corrected, attempted to murder him.

Sporting a mullet, a much younger Auggie gives a young Chris a screwdriver to stab a man to death.

Years earlier, a young Chris and his brother Keith are in their room listening to rock music. Auggie for his part is holding bets, and then encourages both of his sons to head out and fight one another in a no-holds barred match. With a big punch to the cheek, Chris knocks out his brother who ends up convulsing and fitting on the floor. As Keith begins frothing at the mouth, Auggie jumps in and realizes Chris has killed his brother.

In A Whole New Whirled, Chris has dinner with Eagly and his father Auggie, and the father/son duo bond over an anecdote about Bloodsport’s fear of rats. Then, Auggie gives Chris a new helmet since the latter gave his to a taxi driver. The older man boasts a bevy of shiny helmets, all with different capabilities, in his lair.

In Best Friends, For Never, while Auggie is in prison, he walks up to a young black prisoner to demand he move from his seat while the white inmates stand in support of him. Eventually, the white inmates kneel before Auggie and give a Nazi salute as they shout "all hail the White Dragon".

In The Choad Less Traveled, while inside the jail, Peacemaker spills the beans to Auggie by telling him Clemson Murn and the team framed him. Chris asks his dad to stick it out behind bars a little longer while he finishes eradicating the butterflies. However, Auggie spews more vitriol and hurls insults at his son, stating he’ll go to the police to clear his name. Later, Vigilante marches through the prison in his jumpsuit. He immediately sits with Auggie and his Nazi white supremacist lackeys. He tries to incite a fight that will lead to him killing Auggie by throwing out words that will rouse them, and suddenly, one of the Nazis lunges for Vigilante. However, Vigilante is prepared, as he fights of all of Auggie’s buddies with ease. Auggie refrains from fighting Vigilante claiming that he won't be goaded into a fight by him. While the cops seize the duo, Vigilante blurts out that Auggie is a terrible father. Thus, revealing his identity to Auggie. Auggie then emphatically demands to speak with Detective Song.

In Monkey Dory, still in prison, Auggie appeals to Detectives Song and Fitz. He claims Peacemaker has framed him and that hecan prove it. After getting his fingerprints, the detectives match it up to the prints found at the scene, and realize they don’t match.

In Murn After Reading, Auggie is released from prison and is now lusting for blood and turns his attention to killing Peacemaker.

In Stop Dragon My Heart Around, after knocking down Eagly, Auggie turns his attention to Peacemaker. Knocking him down, Auggie prepares to take his son out. Only, John Economos shows up with a machine gun, killing all the fanatics alongside him. Vigilante pounces on Auggie and short-circuits his suit. In doing so, Peacemaker turns his attention to his father and punches him numerous times, calling him out for his hostile attitude in the past. As Auggie antagonizes him, Peacemaker grabs a gun and shoots his dad in the head.

In It's Cow or Never, Chris encounters a vision of Auggie taunting him and taking up residence in his head. Peacemaker unflinchingly reaches for a weapon, unafraid to kill his racist, abusive father again. Emilia Harcourt however bears witness to Peacemaker’s interaction with a ghost. Later, after the big fight against the butterflies is over, Peacemaker finds Goff, who escaped Song’s body, flying outside his window. He gives her what’s left of the amber goo for sustenance as Eagly drops a dead animal at his feet. The ghost of Auggie then sits next to Chris on the porch. 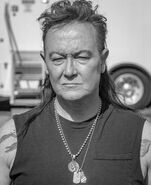